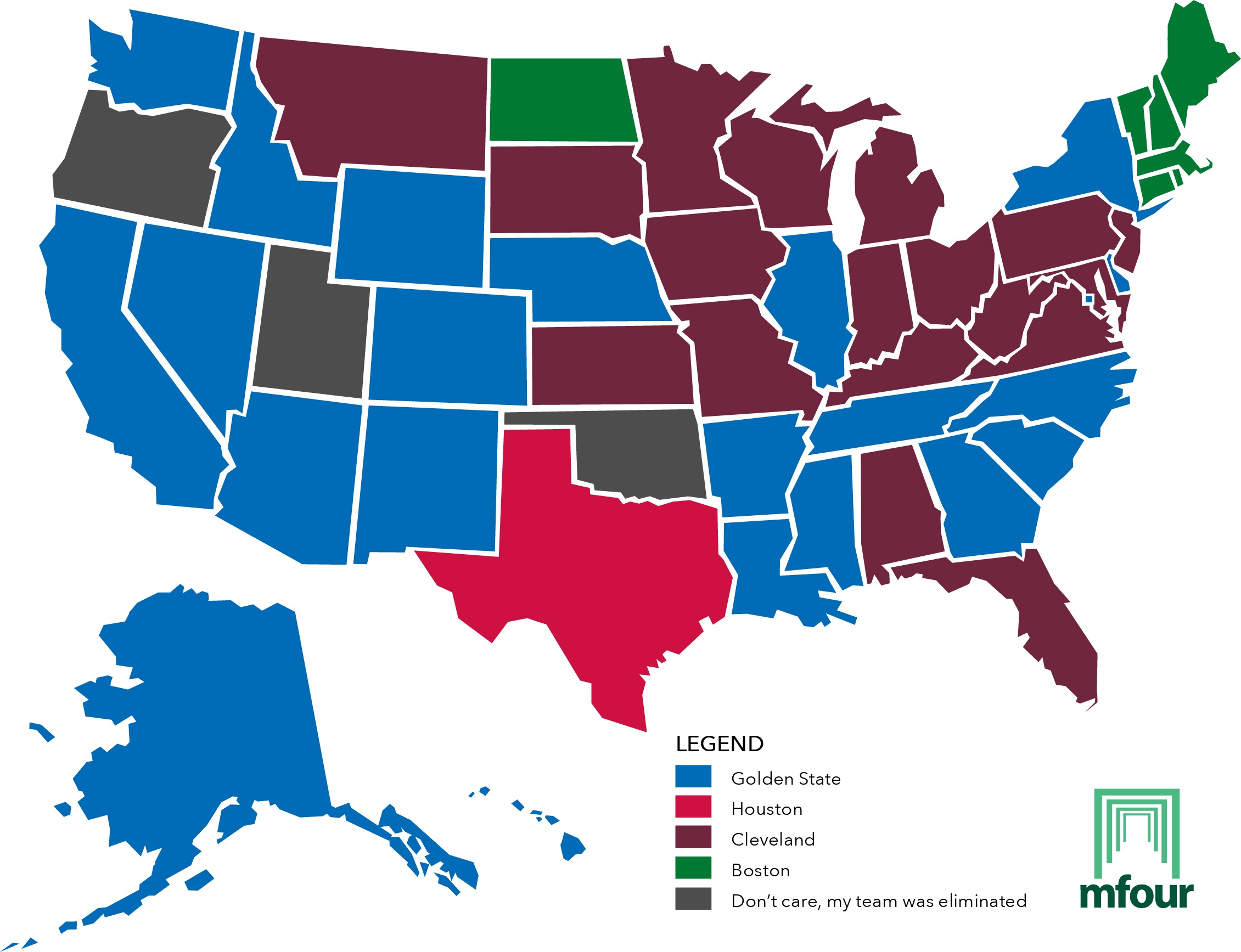 In a nationwide survey of 5,032 Millennial and Gen Z respondents who are interested in pro basketball, 82.1% said they are frequent watchers as this season’s league playoffs near their climax. That includes 65.6% who report watching “nearly every game,” and 16.5% who said they’ve watched every game.

But viewership also was intense among respondents living in some states that don’t have a pro basketball team, let alone one that’s still in the playoffs. That includes 93.7% of respondents in Virginia who said they have watched every game or nearly every game; 89.3% in Washington state, 84.7% in Kentucky, and 83% in Missouri. Survey respondents were ages 13 to 40.

As the conference finals continue with Golden State against Houston and Cleveland against Boston, rooting interest is fairly evenly distributed: 27.5% of respondents want Golden State to repeat as champion, 25.7% are for Cleveland, 20% for Boston and 15.5% for Houston. An additional 11.3% said they are watching but not rooting, since the team they wanted to win the championship has been eliminated.

Golden State owed its favorite-team status to female respondents, 38.8% of whom said they were rooting for the champs to repeat. Men, who made up 87.6% of all respondents, actually gave a rooting edge to Cleveland over Golden State, by 26.2% to 25.9%.

Fans in Massachusetts appear to be the most deeply-invested in their home-state team, with 84.8% saying they are rooting for Boston. Among Ohioans surveyed, 78.3% are pulling for Cleveland.  Meanwhile, Golden State commands loyalty from just 53.1% of the Californians surveyed, and Houston has the rooting allegiance of just 44.8% of the respondents from Texas.

One big difference is that Boston and Cleveland each has its home state to itself, while Golden State and Houston both share their states with other teams – three others in California, and two others in Texas.

But even Massachusetts and Ohio residents who aren’t rooting for their home-state teams are rooting for somebody: not a single respondent from either state said he or she had no rooting interest at all. In California, 8.6% of fans said they’re continuing to watch the games even though they have no rooting interest, and 9.2% of respondents from Texas are watching but not rooting.

As for their views on individual stars, 40.7% of all respondents predicted that James Harden of Houston will win the league’s Most Valuable Player award, followed by 39.9% predicting LeBron James of Cleveland and 8.5% predicting that Kevin Durant of Golden State will take the honor.

The basketball fans surveyed also are heavily oriented to other professional sports: 87.5% said they are interested in pro football, 62.6% have an interest in baseball and 38.6% are fans of ice hockey, where the playoffs also are approaching a climax and competing for viewers. Professional soccer commanded interest from 30% of the basketball fans surveyed, and stock car racing had a 21.6% share.

Most of the fans who are watching the basketball playoffs said their interest doesn’t extend to the celebrity news surrounding one of the players, Cleveland center Tristan Thompson, whose relationship with reality TV star Khloe Kardashian reportedly is in jeopardy. Only 39.5% expressed an opinion as to whether the couple would stay together; 60.5% chose the answer, “I really don’t care, I have better things to do with my life.”

Methodology: The study was conducted May 10-14, fielded to validated, first-party U.S. consumers ages 13 to 40, who participate in research using MFour's mobile survey app, Surveys On The Go®. The 15-question survey was begun by 17,972 consumers nationwide, of whom 5,076 met qualifying criteria; 99.1% of qualifiers completed the survey. Mean completion time was 2 minutes, 59 seconds.