As you can see in the map below, over the last 7 days, we've conducted 1,012 interviews in dealerships across 34 states. 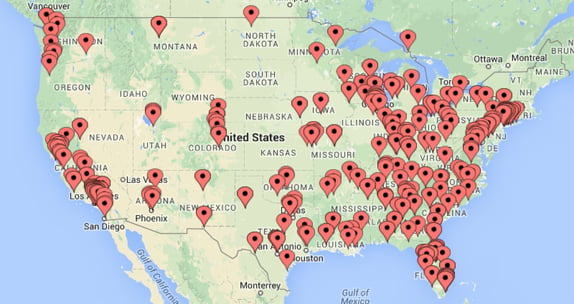 Current recall studies let respondents answer surveys up to six months after their visit.  By that time, memories have faded and researchers are getting a 'memory biased' perspective on customer experiences.

But our Surveys on the Go app push notifies our more than 600,000 active respondents that a survey is available any time they leave an automotive dealership around the United States.  Finally, you can hear from consumers as they leave the lot, at The Point-of-Emotion®about Purchase Intent, Brand Loyalty, Dealership Experience and more.  And because our Native App tracks respondents from dealer to dealer, you can also understand where they're headed next.

Moreover, Mobile Drivers lets a respondent record audio, video and take pictures of their experience, which is reported to clients through SPSS, Excel or MFour's Proprietary Moment-to-Moment® Reporting Platform.

Our interviews validate the fact that in-dealership studies provide faster responses, better insights and more accurate data then any other product on the market.  Click below and hear from actual respondents - one who purchased a new Hyundai and another who was looking for specific features, like a panoramic sunroof:
We can interview by brand, by category, by type of driver and we can even add questions tailored to your needs within the omnibus portion of our weekly study.  If you would like more information or get a free issue of our  Mobile Drivers Weekly Report shoot us an email or give us a call.  We would be happy to speak with you.
0 Comments Click here to read/write comments

This study was a joint effort by Marketcast and MFour Mobile Research leveraging MFour's mobile survey platform. The topic of study was what gamers expect (and want) from digital distribution.

Compared to around 2/3 of movies watched at home that are bought digitally, less than 1 in 5 console games purchased is a digital download. The majority are still bought via traditional physical discs.

Major publishers report that while their digital revenue is growing substantially, full game downloads make up a much smaller portion of this than subscriptions and add-on downloadable content. 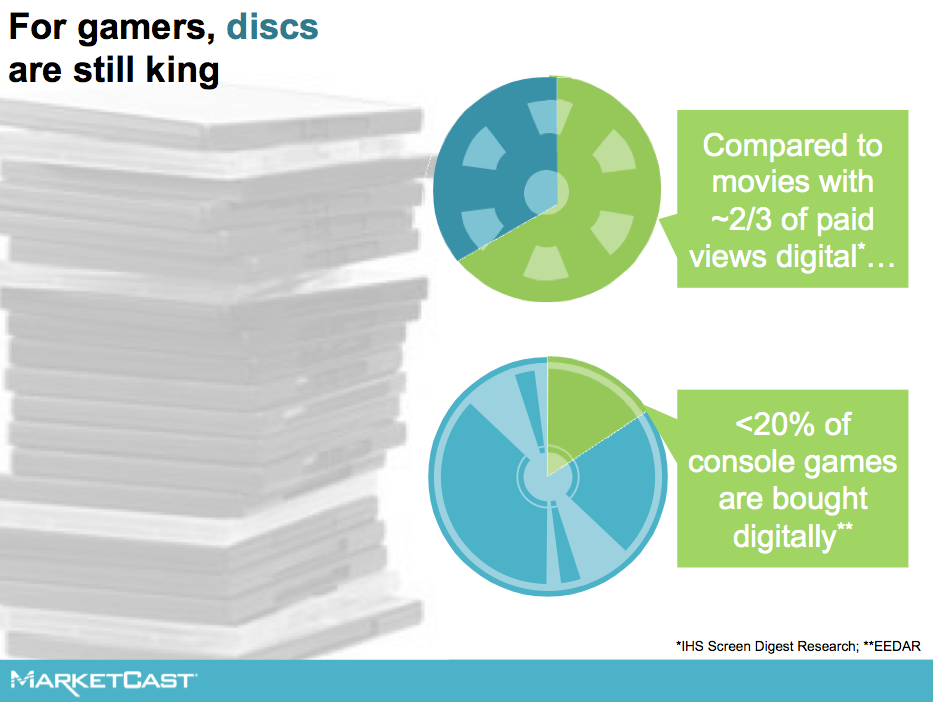 Most coverage in the press focuses on the industry impact, and especially on the overall growth of digital revenue, of which game sales are still a small part. Instead, we decided to talk directly to gamers and find out how they feel about the digital shift in gaming compared to other forms of entertainment, and what they want from this shift. 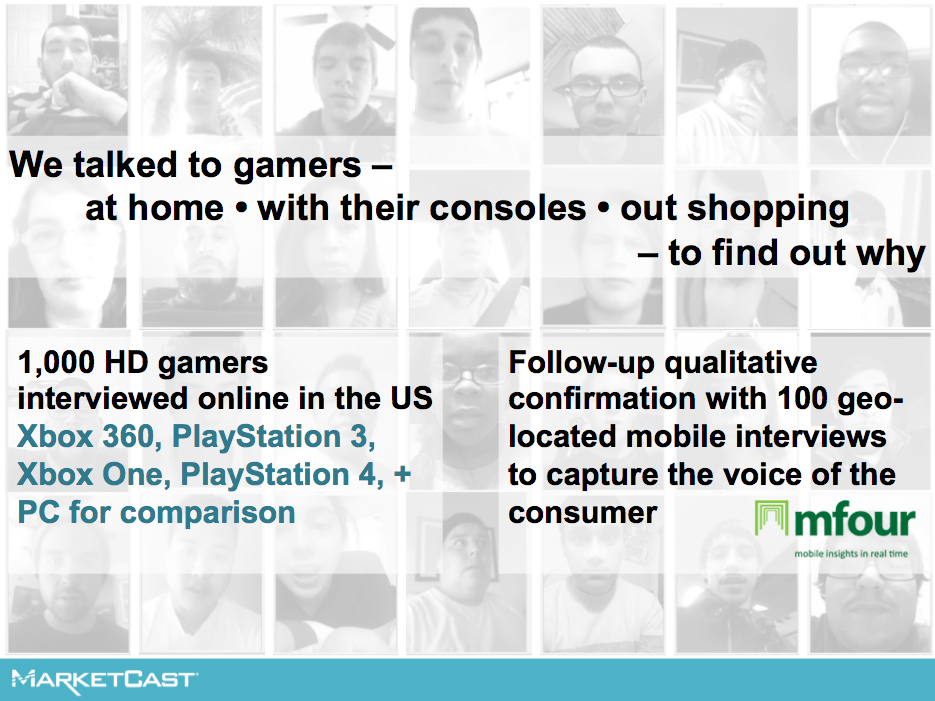 Using MFour's native app, Surveys On The Go, respondents were asked to use their front facing cameras to capture deeper insights. Here is what they had to say:

Current-generation console owners are more likely to be buying games digitally than previous-gen gamers, where only 2 in 5 gamers have bought a game digitally in the past year.

Gamers who subscribe to their console’s premium tier – Xbox Live Gold, PlayStation Plus – are also more likely to be buying games digitally than those who just belong to the free tier.

And gamers who play on both console and PC may be accustomed to downloading games on their computers via Steam, but being a regular Steam user doesn’t carry that download-know-how over to console usage; playing games on Steam has no impact on gamers’ willingness to download games on console. 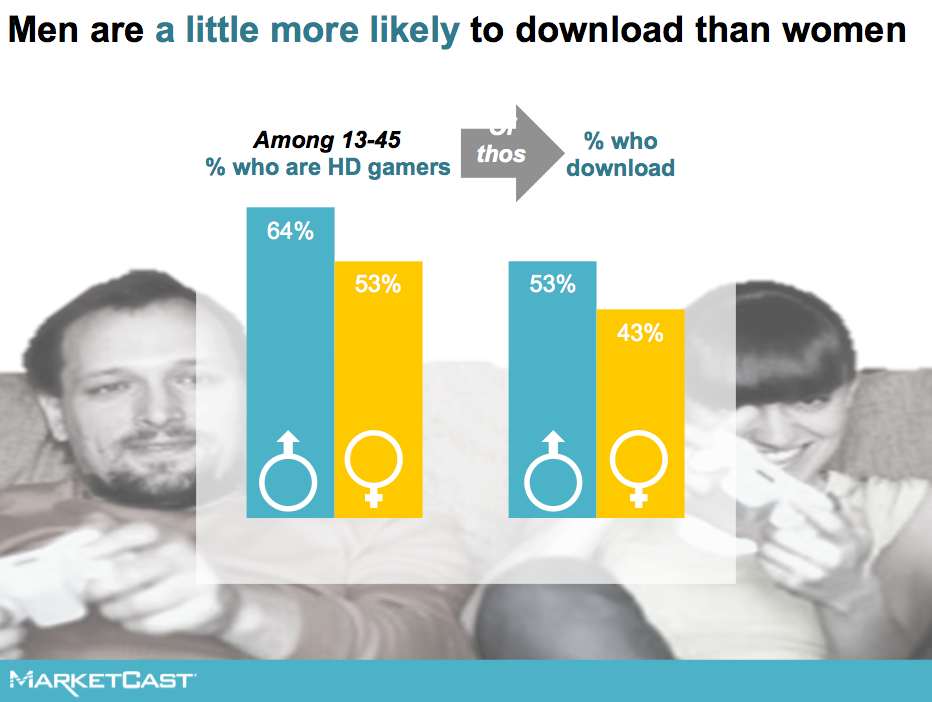 And, although teens might be hooked on digital-everything, older millennials and parents are actually more likely to be downloaders.

All of these console owners tend to have Netflix subscriptions, and they use their cable’s video on demand about equally. But downloaders – along with older millennials and parents – are big on spending their entertainment dollars at home, so not only are they buying games digitally, they’re also subscribing to more digital platforms like Amazon, Hulu, and HBO Go. 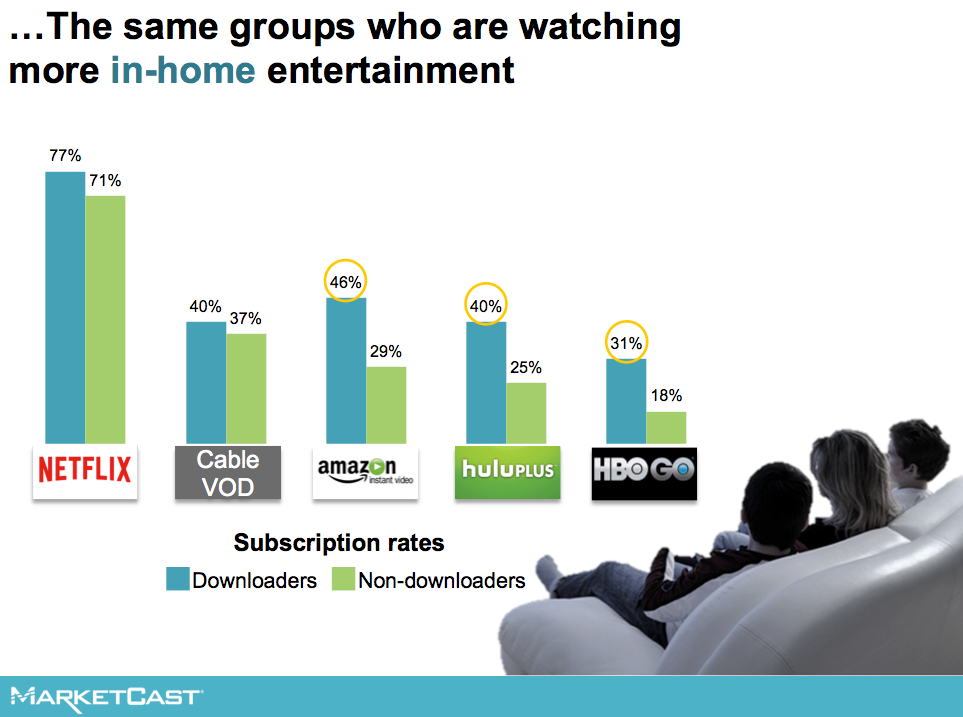 Compared to non-downloaders, gamers who buy games digitally spend 15-20% more on last-gen games for the Xbox 360 and PlayStation 3 overall. And they spend 30-40% more on games for current gen consoles. 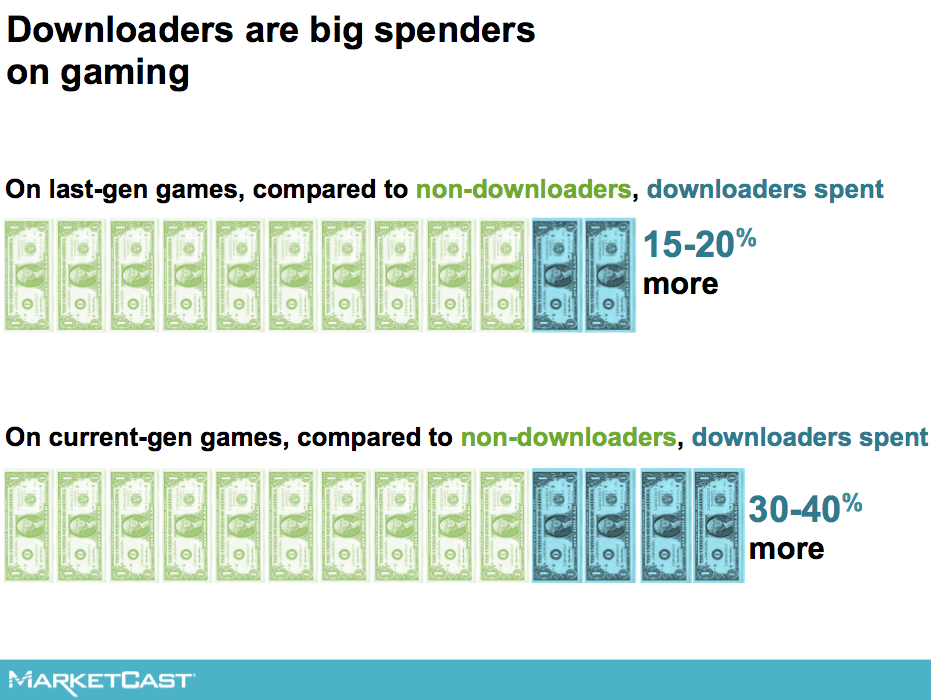 Even though most still prefer physical copies, gamers admit that they’re personally driving this shift toward digital forward. Almost no one says that they expect to be downloading FEWER games in the future. 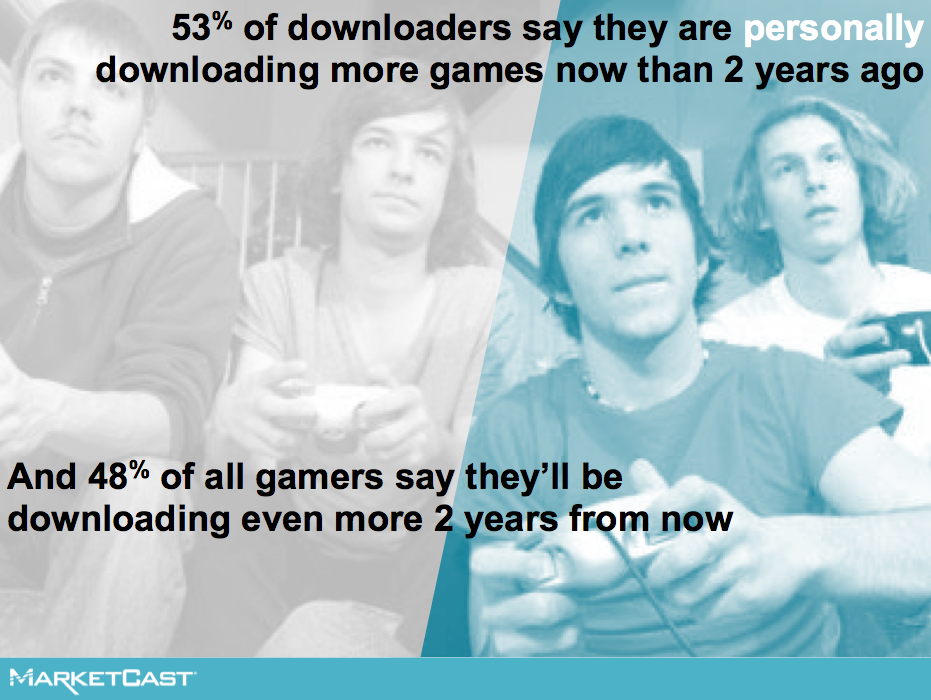 A majority of both downloaders and non-downloaders all agree that digital distribution is the direction that we’re headed in for video game purchasing. 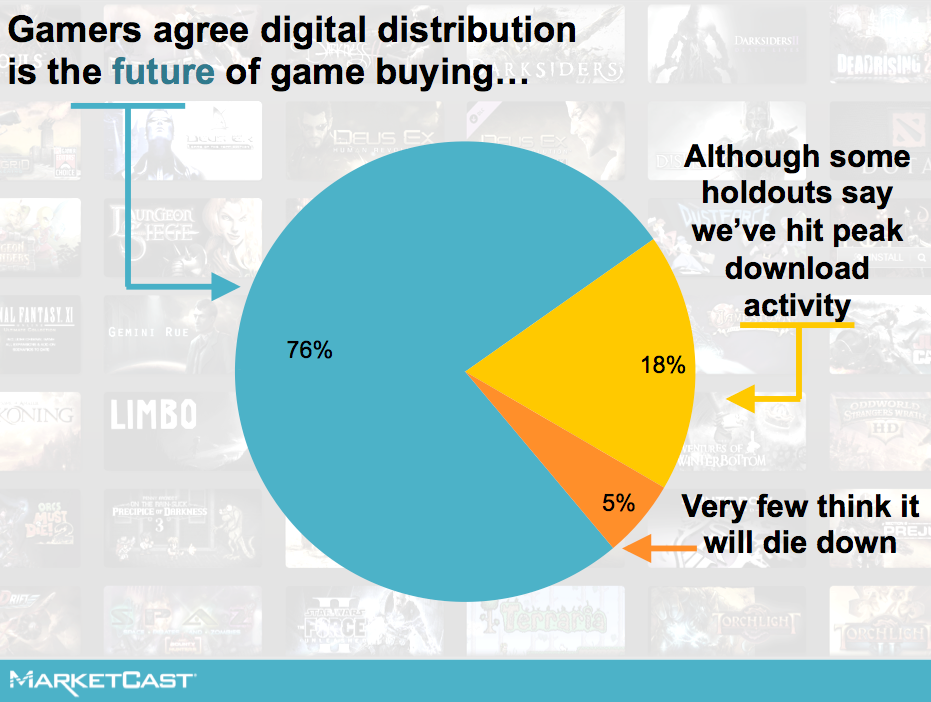 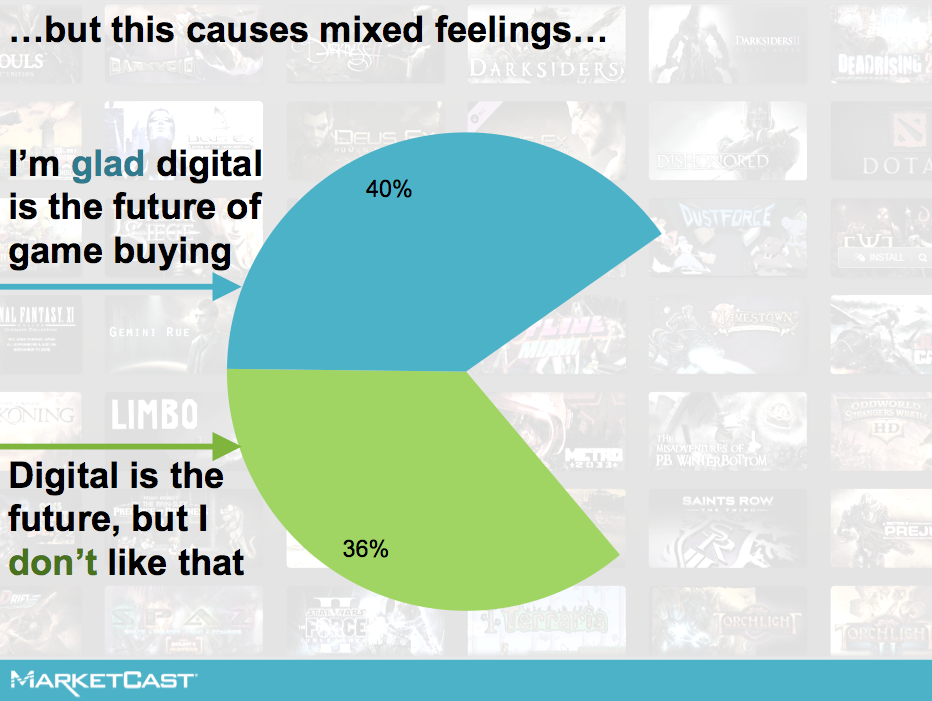 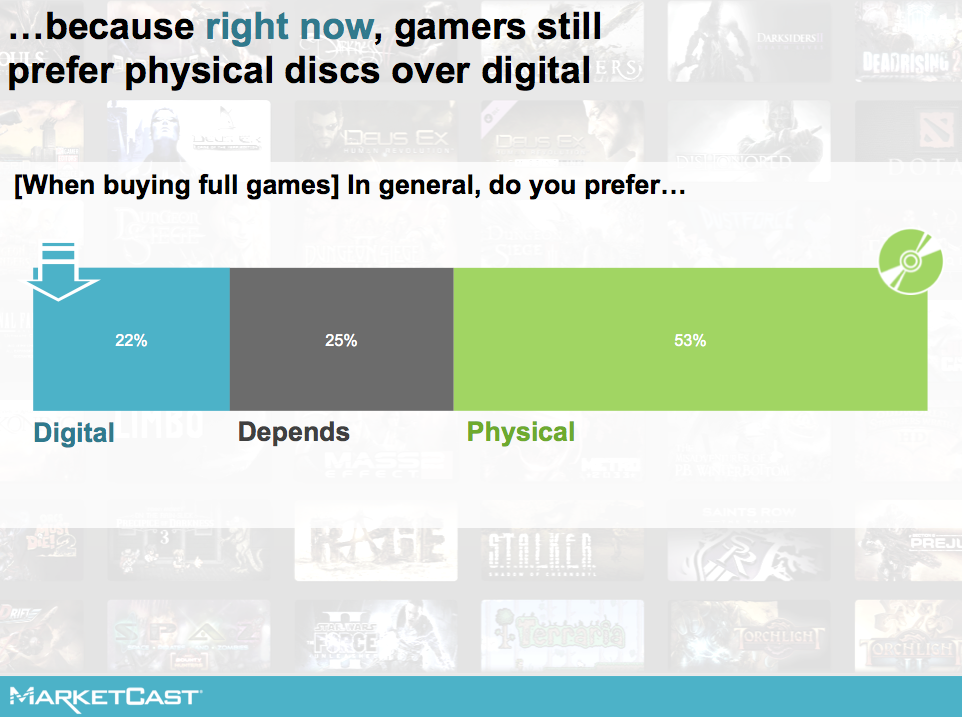 The act of having a physical disc feels more real and as a result tangible value becomes intangible value. Physicality creates a perception of more value; having something tangible is important on its own. But also, down the road, it becomes a form of currency.

Those two forms of value – the tangible use of games as currency, and the intangible feeling of ownership, make up the main reasons why gamers keep purchasing physical rather than digital. The other side of physical purchasing is mostly made up of a sense of security: people fear that they will be prevented from keeping their purchases because of hard drive space, consoles crashing, or gaming companies changing the rules. 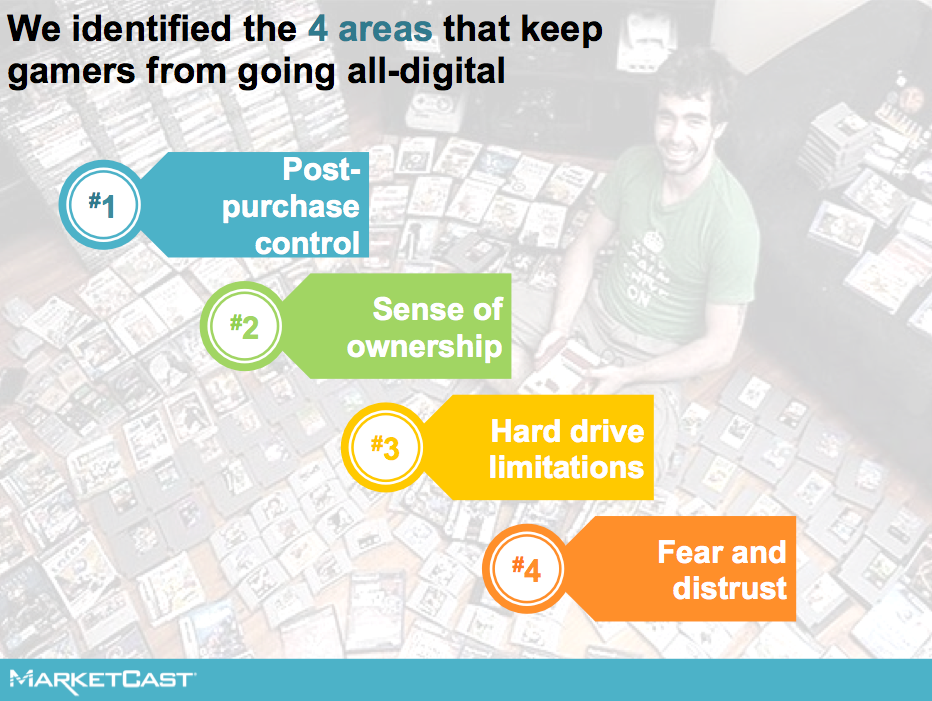 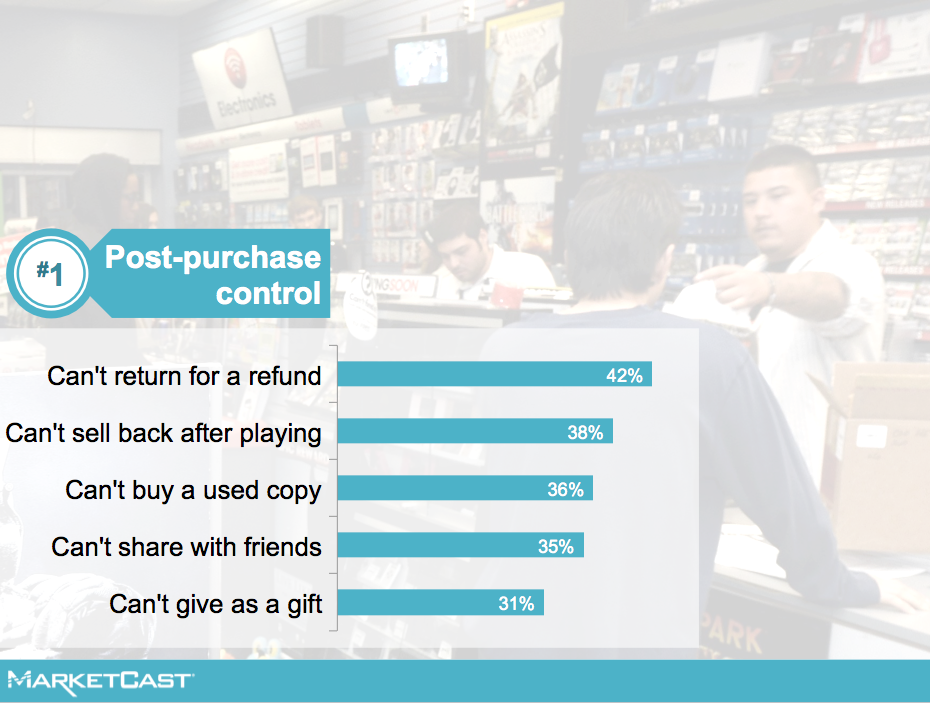 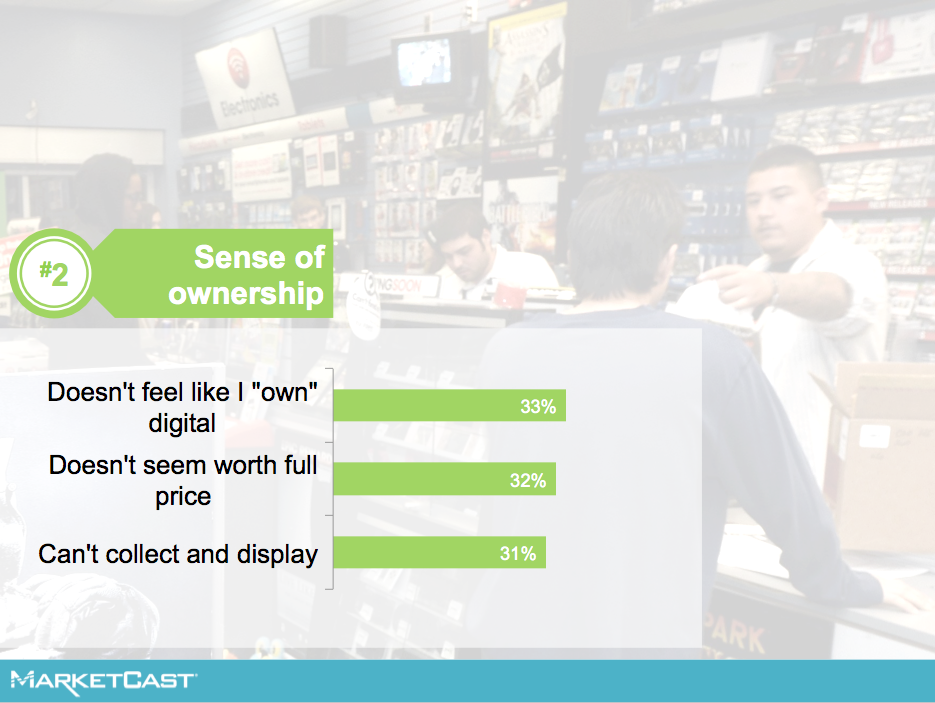 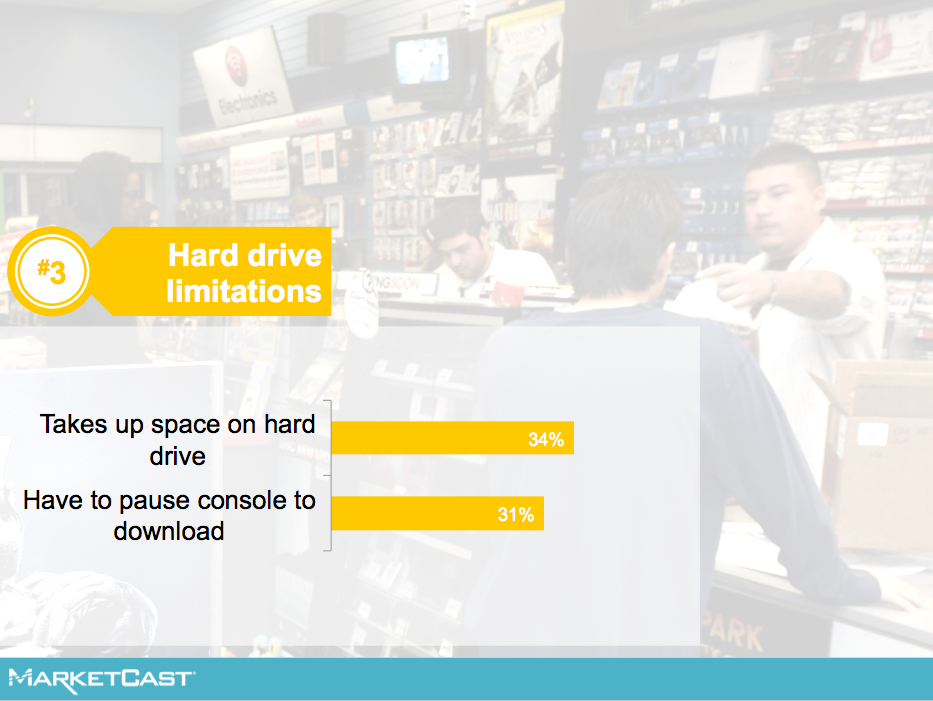 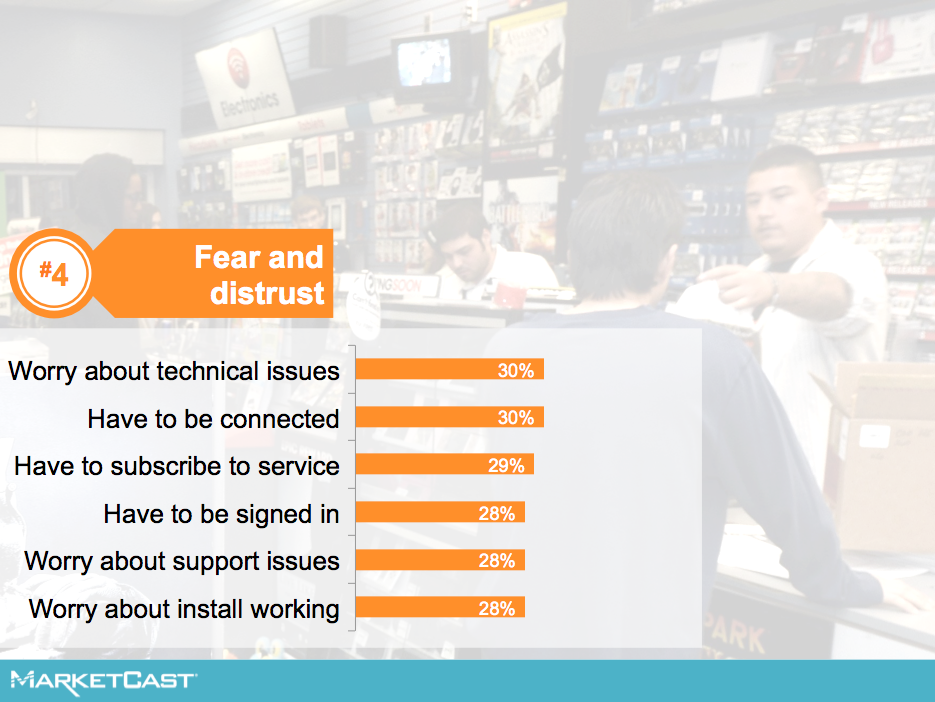 Gamers are actually very satisfied with the functional experience of downloading. Aside from storage space, the tech is not a problem. 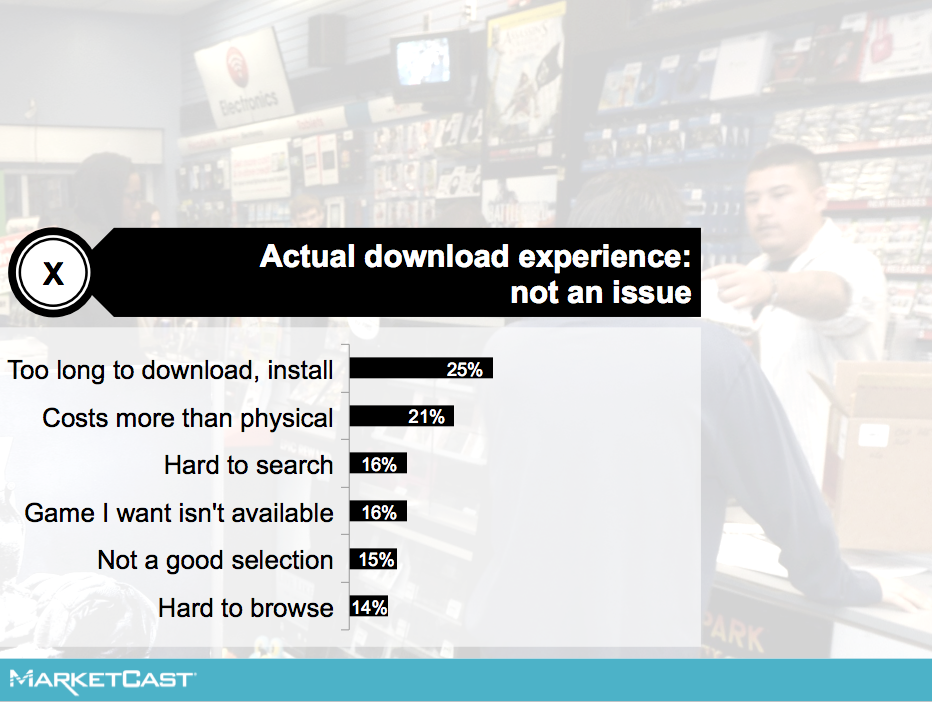 They personally feel that not having to interact with store employees, along with not even having to go to the store, is one of the advantages of downloading over buying physical copies.

Virtually everyone wins except for the physical retailers. Gamers are optimistic that they will benefit from a digital shift in the long run, and they expect brick-and-mortar stores to be the only ones who really suffer.

In the world of movies, the retailers played a part in encouraging the digital shift along. Big-box stores promoted DVDs and Blu-Rays as loss-leaders, with heavy markdowns and those big boxes of random DVDs to dig through. This helped make the physical product seem less valuable, and consumers placed less premium on owning the discs, which primed the market for a digital shift.

That’s not likely to happen in the gaming world. Games are sold with a comparatively higher volume out of gaming-specialty stores rather than big-box stores, and gaming-specific retailers are unlikely to turn their main product into a loss leader by cutting down the base price.

And what do respondents think about the long run for downloading games?

Or, instead of downloading full games, consumers are open to the gaming industry taking a fully different route and following directly after the footsteps of movies and music, to offer something like a streaming service membership. This is still in its infancy, but services like PlayStation Now are trying to redefine digital gaming with streaming possibilities. And gamers are definitely open to that.

In fact, a monthly subscription is more appealing than a future console with all digital downloads… with the exception of one that makes games cost less overall.

While some gamers note that the file size and the need for zero lag will be a hurdle to overcome for streaming games, they like the idea especially because it overcomes the fear of getting stuck with a dud that you can’t return or sell back. 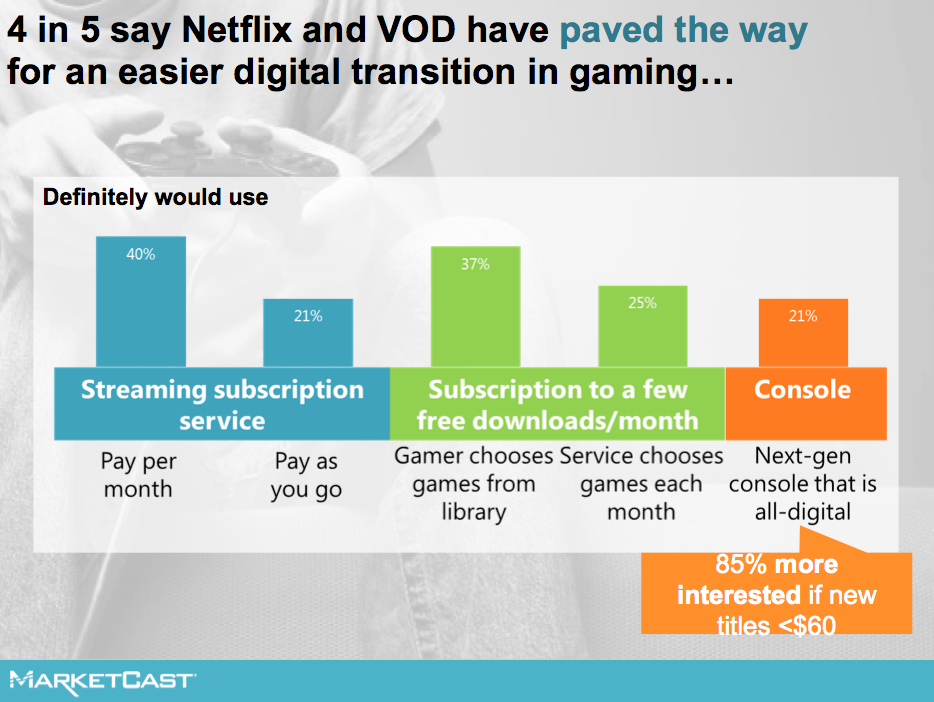 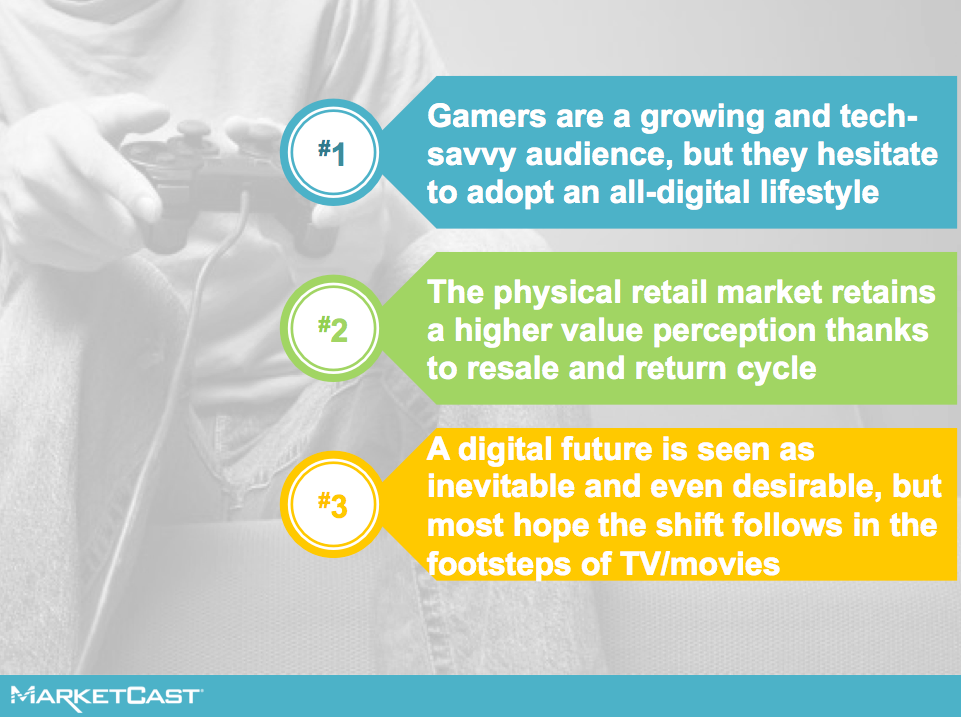 For more information on MFour's mobile solutions, click on the solutions tab at the top, or fill out the form below.

Want 20+ Minute Mobile LOI's?
You'll Have to Do Better Than This 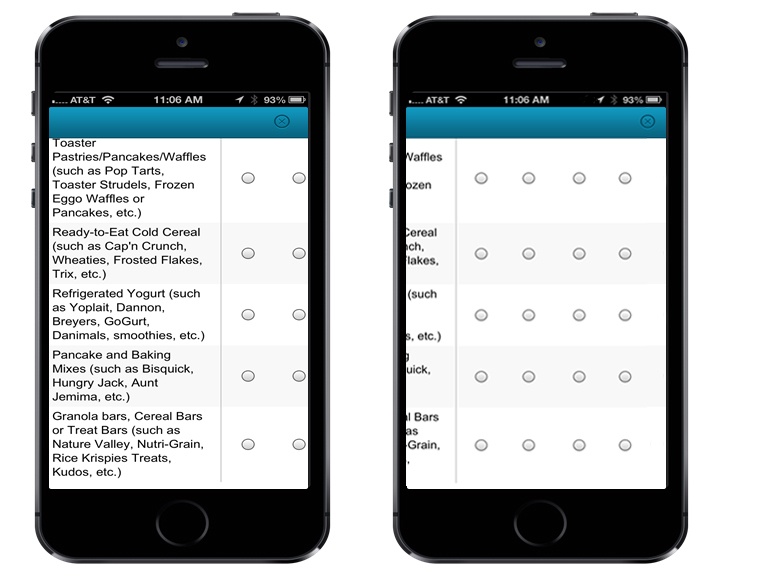 What you see above is something that literally drives survey respondents to distraction -- a deeply flawed mobile survey format that's guaranteed to frustrate and alienate. Not only does it look bad, but the technology that's being employed leads to even more frustration and alienation. Basically, it's forcing mobile respondents to use their smartphones in a banal, unsatisfying way: connecting to a website to take an online survey.

The poor display you see above, coupled with outdated survey technology, f is responsible for one of market research's biggest myths: that mobile surveys have to be kept very short.

Accomplishing longer, deep-dive research projects is well within reach. The key is using the right technological platform for the Smartphone Era. It's now possible to embed surveys instantly in panelists' phones by using a native app. Respondents love apps, and in-app surveys ensure that they won't have to depend on a cell signal or wifi, which are vulnerable to interruption and slow load-ins of survey questions.

To illustrate the point, here's the data  from a comparative study that tested engagement with  a 20-minute survey launched in three separate mobile formats: Native App, Mobile Optimized and Mobile Friendly. 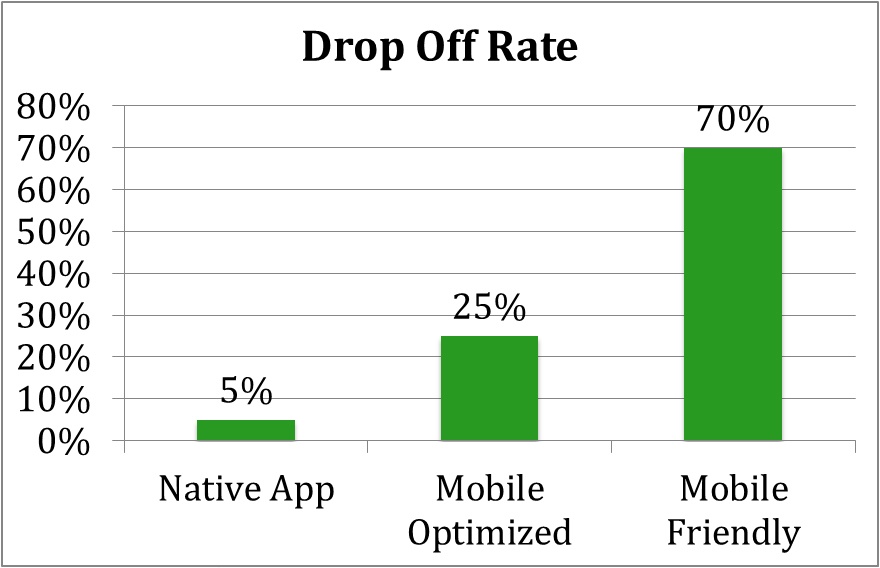 As you can see,  native app engagement eclipses "mobile optimized," to the tune of five times fewer drop-offs. And drop-offs were 14 times higher for the "mobile friendly" approach. To learn more about advanced, in-app mobile survey technology and the research solutions it provides,  just click sales@mfour.com.