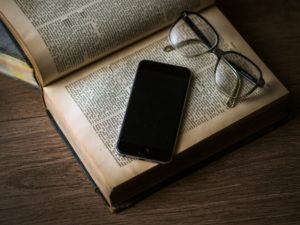 There’s nothing quite like books to exercise the brain, and Americans increasingly are using mobile devices to read them, according to a new study by the Pew Research Center.

This finding is one more nail in the coffin of a market research myth: that mobile devices aren’t suited to the longer, more complex surveys required for a deep dive into a research topic. People who’ll spend hours reading a book on a smartphone will surely spend 20 minutes answering a mobile questionnaire – if, like the book, the survey holds their interest and functions properly on the phone. We know it because we see it all the time.

Pew’s study, “Book Reading 2016,” offers some surprises – but the fact that book readers are gravitating toward mobile devices isn’t one of them. Mobile is “The Way We Live Now” – the title of a book by the prolific 19th century English novelist, Anthony Trollope, which you can read on a screen of your choosing.

One gratifying finding for people who don’t want to see every beloved tradition get kicked to the digital-age curb is that books with real bindings and pages are one legacy technology that’s holding its own. 65% of American adults reported having read at least one printed volume during the 12 months ending April 4 – a figure that has held stable since 2012.

But Pew researchers also found that more readers are integrating smartphones and tablets into their reading. Here are key findings about mobile book consumption:

Laptops and desktops are not nearly as popular with book readers as mobile devices. Only 11% of Pew's respondents said they had read a book on a laptop or desktop during the past year -- compared to the 28% who’ve used smartphones or tablets.

Millennials, who are much more reachable for surveys on mobile devices than on personal computers, unsurprisingly are also more inclined than other groups to read books on their cherished smartphones or tablets. 37% of Pew's respondents In the 18-29 age group said they had  read a book on a mobile device (22% smartphone, 15% tablet). The 30-49 age bracket, which includes older Millennials, was close behind at 36%, divided equally between smartphones and tablets.

The implication for market research seems clear: people like mobile devices, and they'll give close attention and more than a few moments of their time to mobile surveys that engage them and are relevant to their lives as consumers.

This isn’t just a hypothesis. Smartphone users’ willingness to stick with mobile surveys for 20 minutes or more is a fact MFour and its clients have confirmed repeatedly over many projects.  At that length of interview we expect response rates of 50%, and completion rates above 90%.

Results like this aren't automatic. The magic isn't intrinsic to mobile devices, just as the magic in a book isn't intrinsic to the paper and ink, or the pixels. It depends on human factors -- designing the best mobile survey software, recruiting and engaging a reliable and representative panel, and acquiring and applying the experience  that's needed to excel in applied technology and client service.

MFour has written the book on how to carry out mobile research. We’ve been pioneering and advancing these methods since 2011, when our Surveys on the Go® app debuted. We are to mobile market research what Gutenberg was to the printed text.

Now we’re delighted to have learned from Pew that reports of the traditional printed book’s death have been greatly exaggerated. It may be an old technology, but it still works. And now there's mobile reading on smartphones as a useful supplement.

The same can’t be said for traditional online market research. It no longer serves its purpose, the way a printed book does. It isn't being supplemented by mobile research. It’s being supplanted.